There are a great many sweetbriers in and near the fields at Marie Curtis Park. This is a European species which has naturalized as an escape from cultivation. A member of the Rose family, sweetbriers are also called Eglantine Rose or Sweet Briar.

The plant has major thorns:

These prickly stems are avoided by grazing animals, so that it can dominate the vegetation when well established.

The orange to red hips are very noticeable at this time of year: 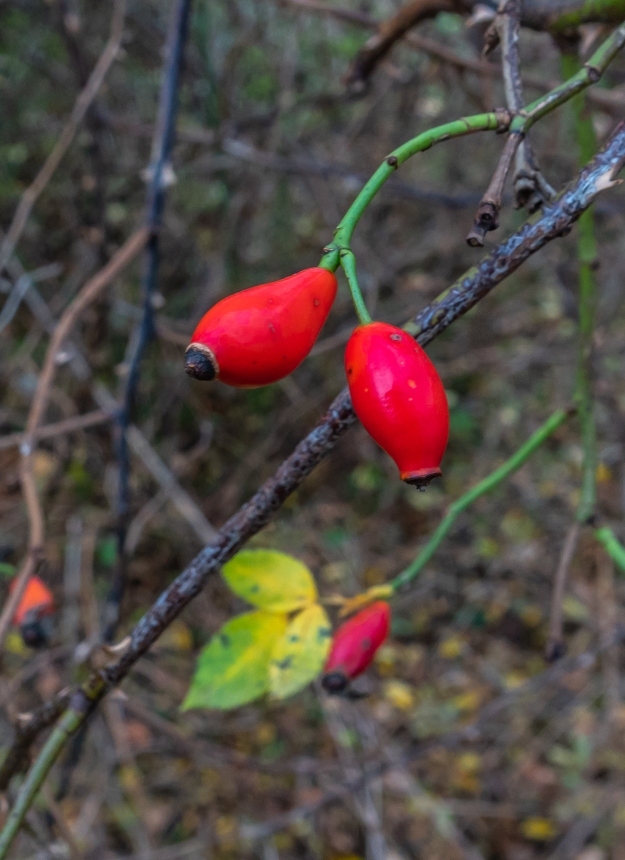 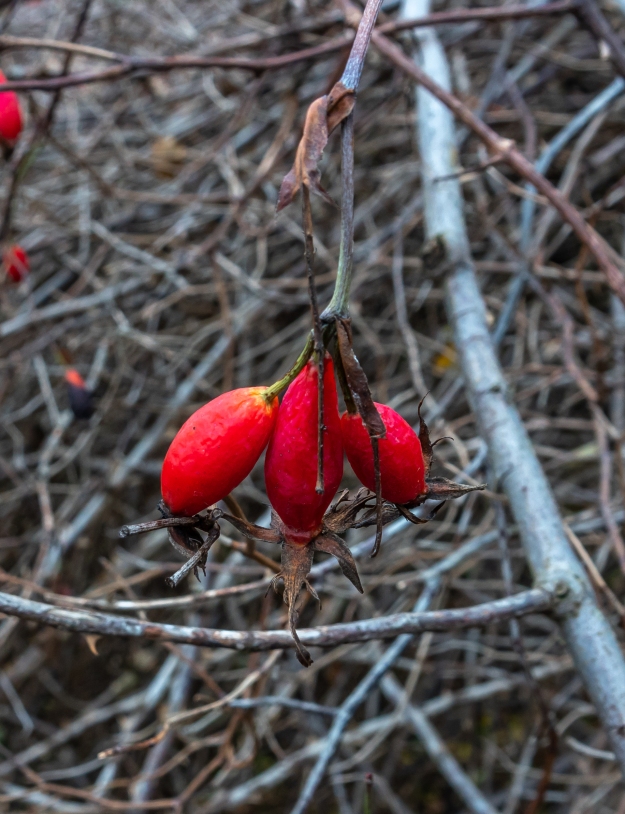 Here is what the flowers look like in spring: 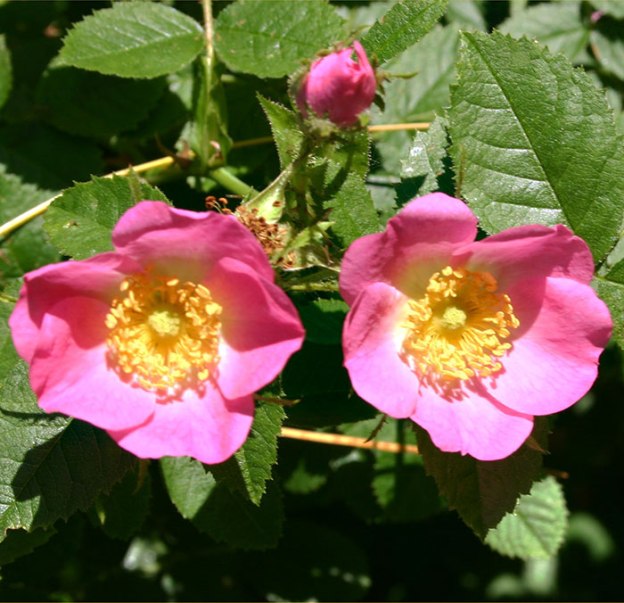 The “sweet” part of the names comes from the fact that crushed leaves smell like apples.

In fact, the plant is related to apples and has similar seeds.

Here is a hip cut in half: 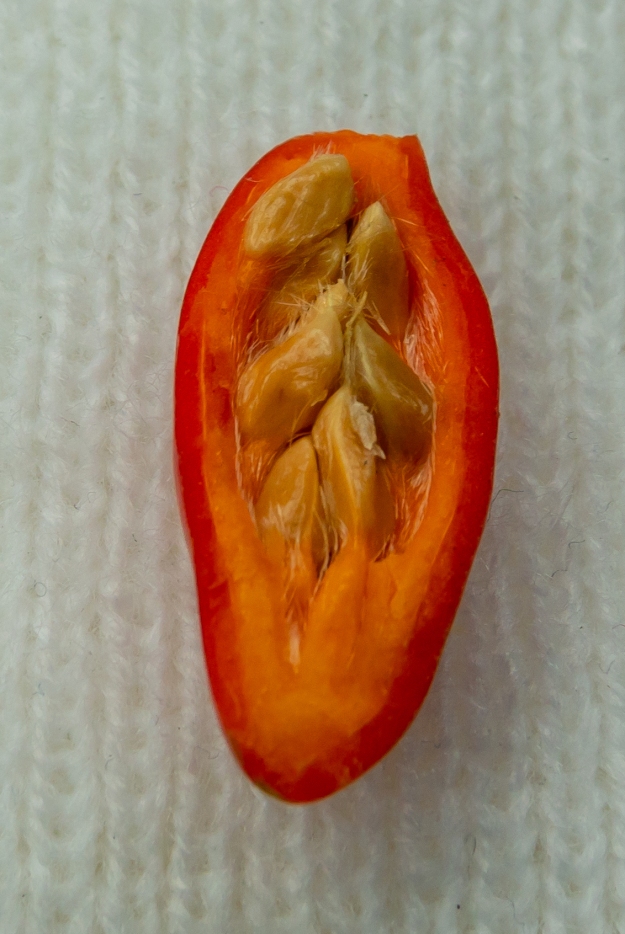 and a close-up of a seed: 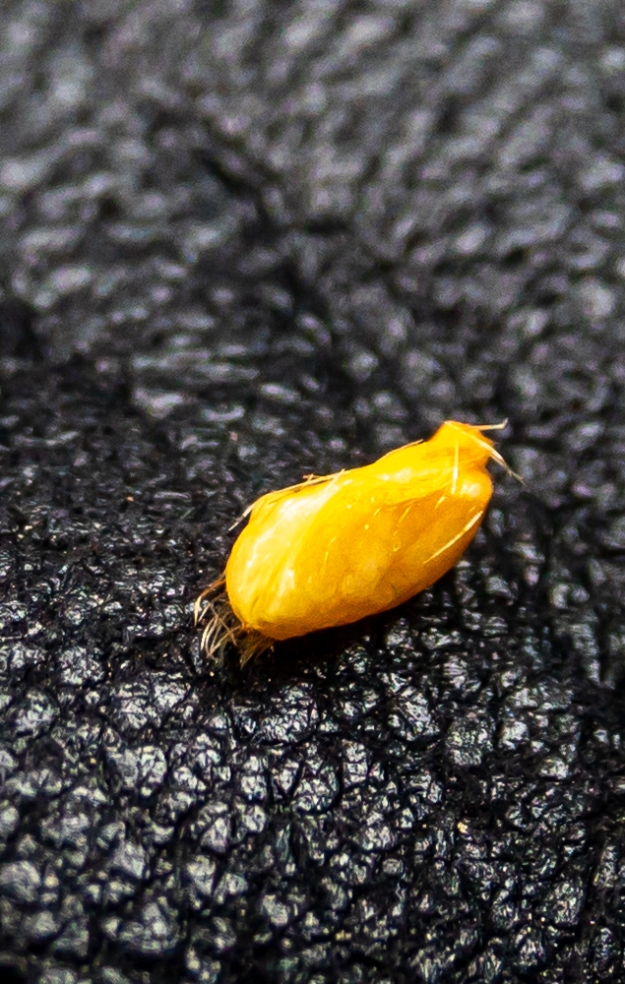 Rose hips contain Vitamin C and are used to make tea and in the making of medicines.

Here are some views of the park on this -2 degree, windy and overcast morning: 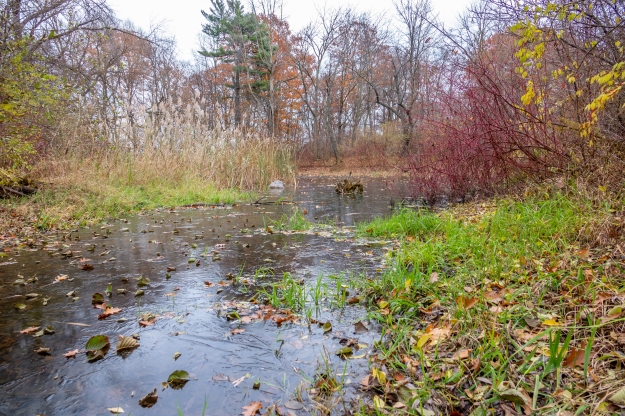 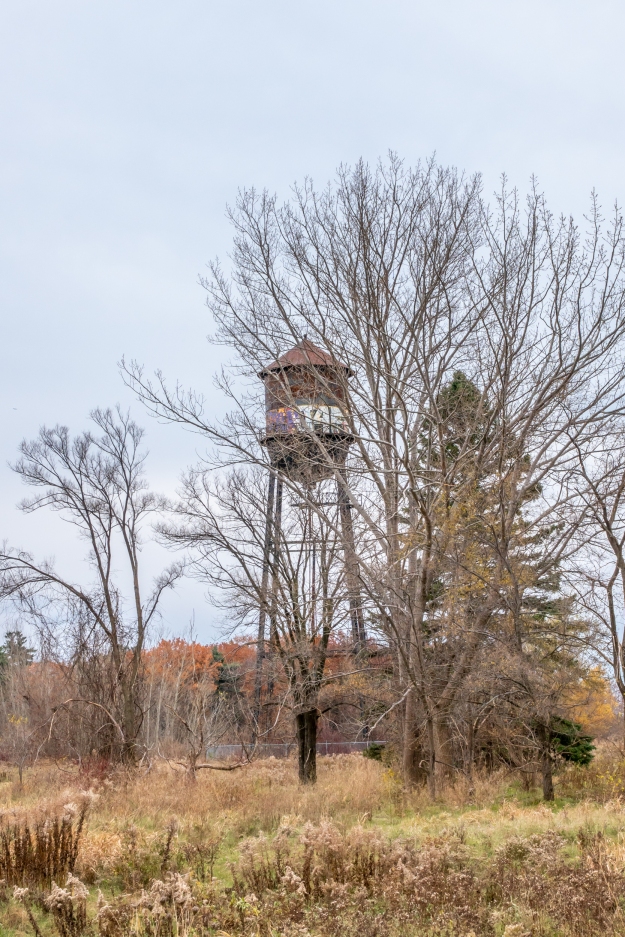 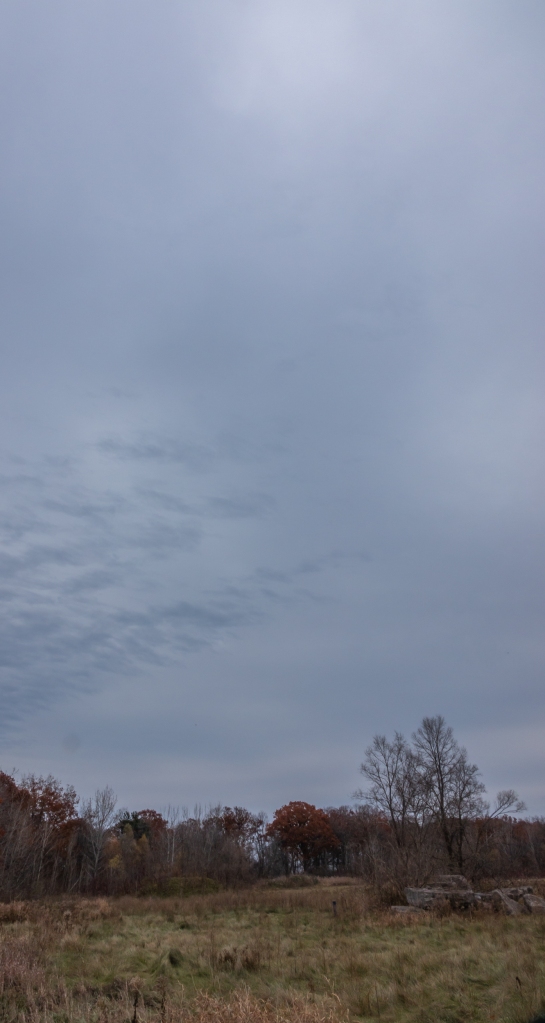 There is an old adage Berries white? Quick, take flight! referring to the fruit of Poison Ivy: 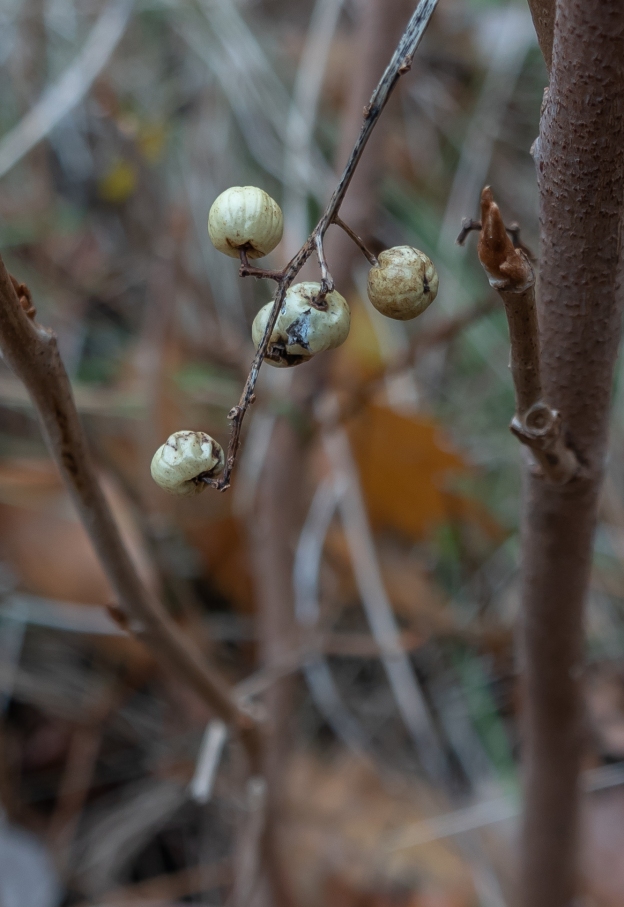 We were fortunate in encountering a mother deer and her fawn in the woods: 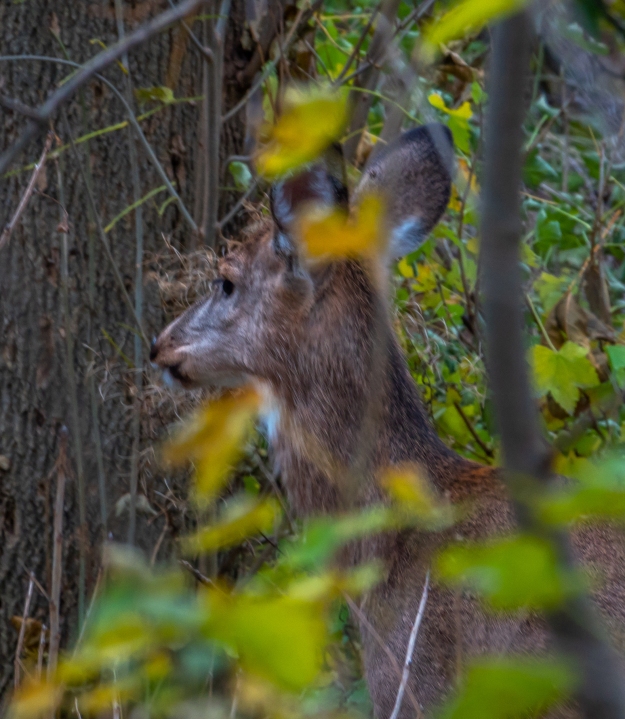 Yesterday I realized only after close inspection of my photo that we had seen a Golden Eagle. This morning while admiring a Hooded Merganser: 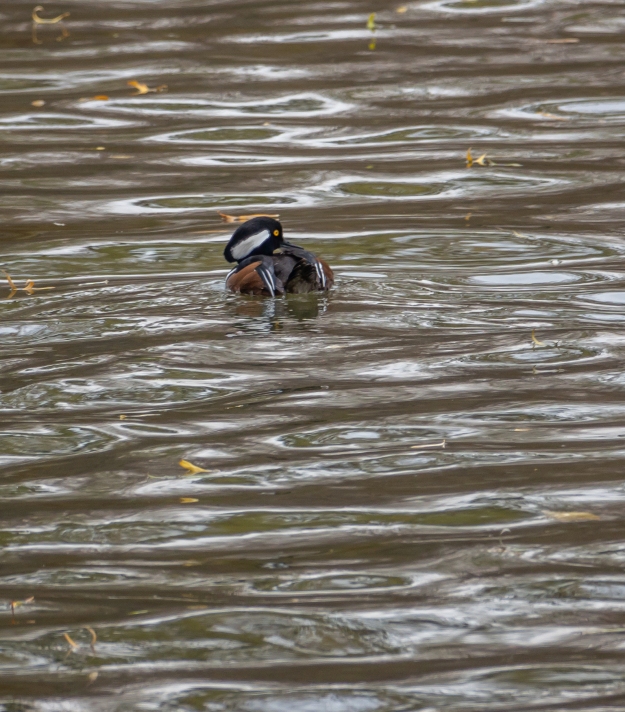 I took a photo of what appeared to be a sleeping female Hooded Merganser and on arriving home realize that it is a Common Goldeneye (female); my first of the season: 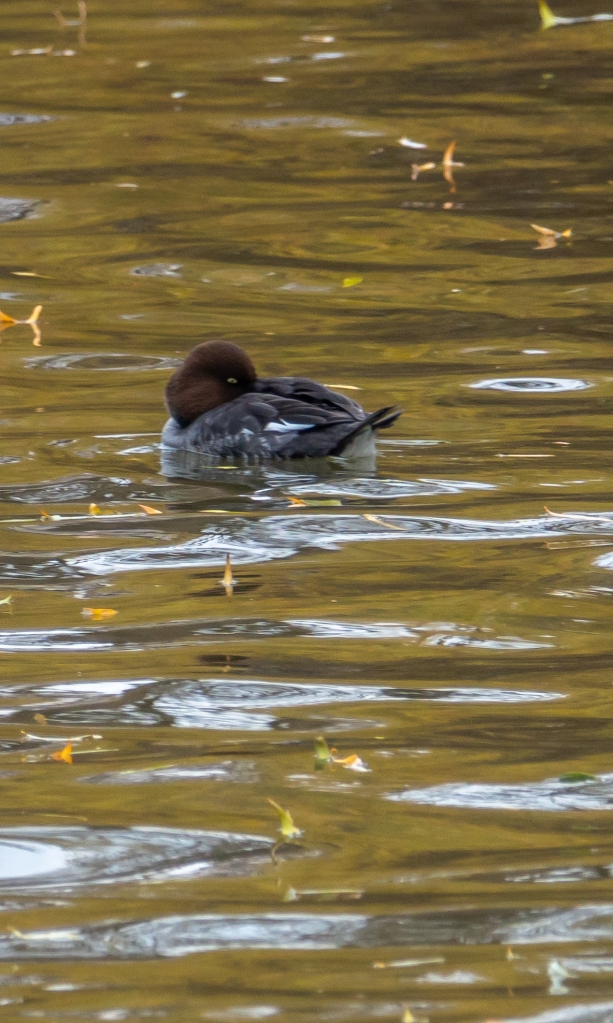 The golden eye gave it away.

Other birds include a Bufflehead (male): 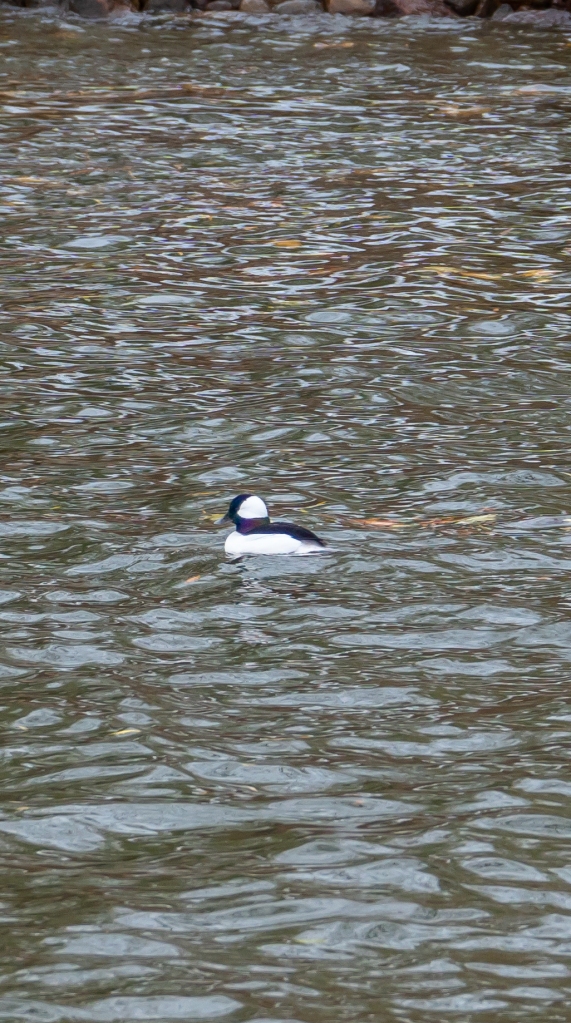 and an American Black Duck with some curious white head feathers: 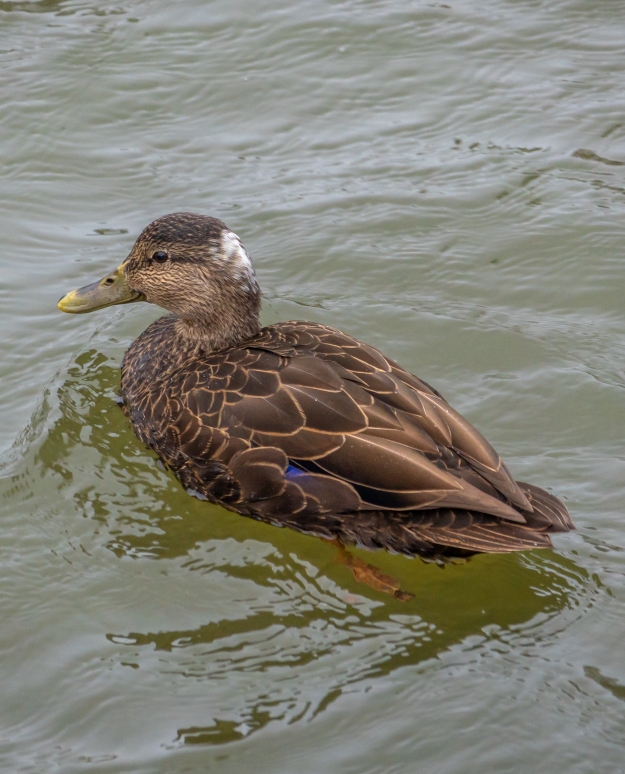 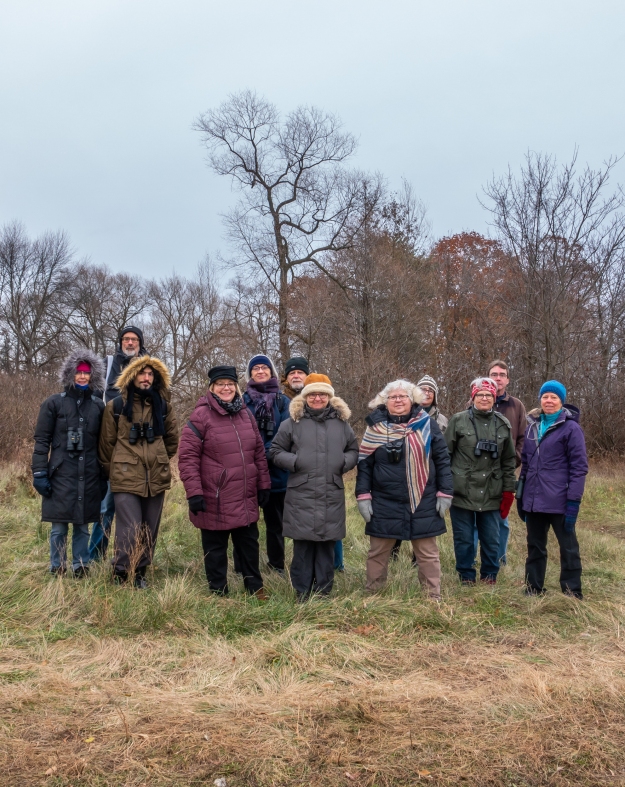 Miles Hearn
NATURE POETRY
‘O dreary life,’ we cry, ‘O dreary life!’
And still the generations of the birds
Sing through our sighing, and the flocks and herds
Serenely live while we are keeping strife
With Heaven’s true purpose in us, as a knife
Against which we may struggle ! Ocean girds
Unslackened the dry land, savannah-swards
Unweary sweep, hills watch unworn, and rife
Meek leaves drop year]y from the forest-trees
To show, above, the unwasted stars that pass
In their old glory: O thou God of old,
Grant me some smaller grace than comes to these!–
But so much patience as a blade of grass
Grows by, contented through the heat and cold.
– Elizabeth Barrett Browning (1806-1861)