The Sun fuses atoms in thermonuclear
reactions that create light
and heat, so desktop fusion
sounds like a dream-come-true.

Researchers have for years tried to
harness nuclear fusion to power
the world. Sadly, nuclear fission –
the breaking apart of atoms – is the only method that is so far
commercially viable. 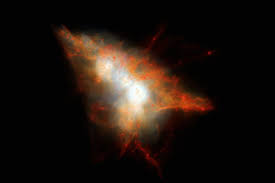 The latest invention is not the result of efforts to build commercial
reactors. About the size of a tennis ball, the new device creates
a relatively small number of reactions, and requires more
energy to operate than it produces, but the configuration is so
small and simple that its creators think it may inspire unforeseen
applications.

By heating a 1cm3
crystal, then plunging it into cold water, it will
cause nuclear fusion. This generates about 100,000 volts in a
chamber filled with deuterium gas, a heavy form of hydrogen.

The high voltage accelerates nearby deuterium nuclei at a solid
target containing more deuterium. When two nuclei collide at
high speed, some fuse to form helium. The new helium atom
weighs a tiny bit less than the two hydrogen atoms that created
it. The missing mass has been completely converted to energy –
remember E=mc2
– and a stream of neutrons.

Current neutron generators are about the size of a dental X-ray
machine, so you can’t really carry them into the field, but because
the particles are so penetrating, a hand-held neutron
source might one-day be used to do geologic surveys or to look
into cargo containers for nuclear devices. Hang on, here comes
the future…