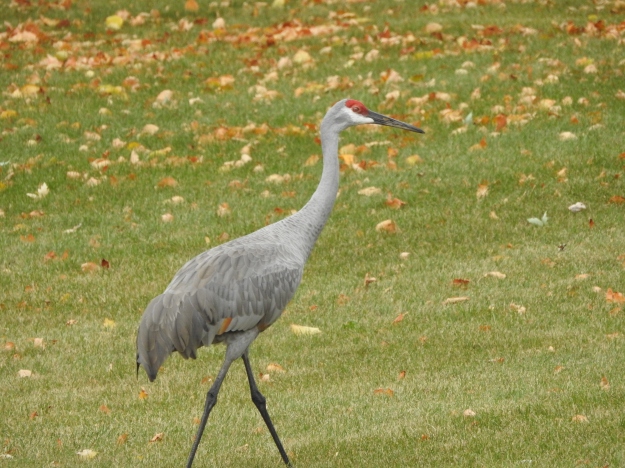 We went to Michigan in October to observe Sandhill cranes as they roost and rest in northern Michigan in preparation for their migration to Florida at the end of the fall season. The cranes show up in Michigan from early October until the end of November

It was a 5 – 6 hr. drive due west from Toronto, just outside of Jackson Michigan, which is near Ann Arbor Michigan.

We went to the Phyllis Haehnle Memorial Audubon Sanctuary to observe the cranes. This is where most of the cranes can be found roosting at night. There is a pond and mudflats where the cranes rest at night During the day, the cranes feed on the waste grains following the harvest of corn, wheat and barley. The Sanctuary is located near farmers fields, so we had a chance to see the cranes up close during the day feeding in fields, and on lawns in the area.

They return to the roosting area in groups of 3 – 10 cranes just 2 hours before darkness. We went to the Sanctuary at that time of day, and observed many groups flying low overhead.

They have loud calls that can be heard for over a mile away. The cranes stand 4 ft. tall and weigh about 12 lb. They start to migrate south to Florida at the end of November after they have fattened up on all the field grains.

This particular Sanctuary has been known to have up to 2000 cranes use the fields, mudflats and pond in the fall.

I had only seen 1 sandhill crane in a field at Algonquin Park many years ago, and I always wanted to know more about them.

I would recommend the trip to anyone wanting to see the cranes up close, as well as enjoy the beautiful fall colours along the country roads in this area, as well as the Sandhill Crane winery. There are plenty of restaurants, hotels and B&B’s in Jackson to accommodate birders. 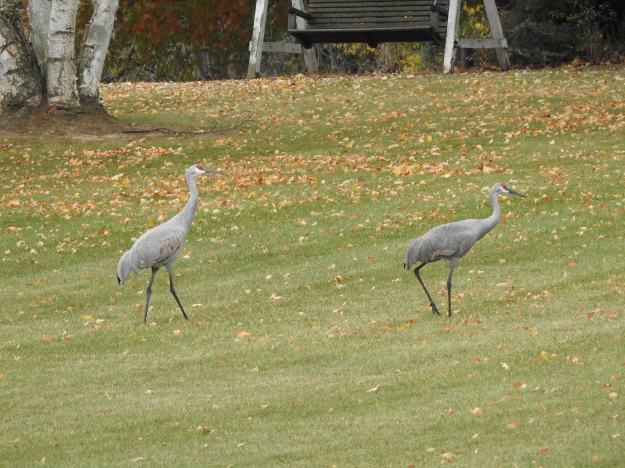